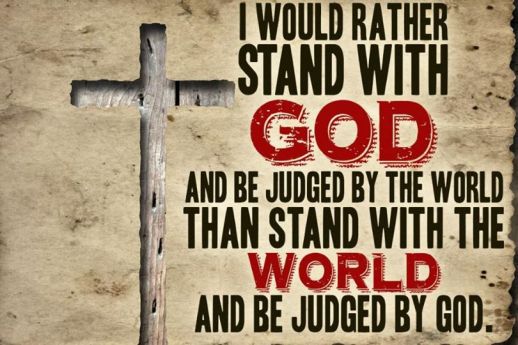 Over the years, too many Christians have turned a blind eye to the sin around them. Their attitude was that as long as they didn’t participate, then it didn’t bother them. And because of that, sin was able to spread without resistance. We are living in a time when it is no longer acceptable to just sit by and say nothing. We were born for a time such as this and silence is no longer golden!

If more Christians had stood up against the petition for abortion to be made legal just a few decades ago, we would not have the unjustified and legal murder of millions of babies that we have today! People have made their own bodies to become gods above the God of Heaven, and they’ve allowed the ancient sacrifices to Baal to invade our societies. So we have not only made it legal to murder babies, but we have encouraged the corruption of immorality to spread flagrantly across the globe, and this sin is destroying everything sacred in its path.

The world is falling deeper into sin every day. The devil is loose, and he is doing everything within his power to get everyone to follow him. Why? Because he knows that Jesus is about to return and that when He does, He is going to sit on His throne in Jerusalem and rule forever. This is just the opposite of what the devil wants because HE wants to be the king. Satan rebelled against God a long time ago and threatened that he was going to take the throne and rule over the people of God. He took his first rebellious step in Heaven and was cast out of Heaven (Isaiah 14:12-14), and then he took the next one when he slithered into the Garden of Eden and deceived Eve into eating the forbidden fruit. (Genesis 3:1-6)

Deceit is the devil’s greatest weapon! He first deceived Eve into thinking that this was acceptable to God, and then she convinced Adam to disobey God because he trusted her instead of obeying what God had told him. The devil’s plan worked! Sin invaded their hearts, and they became filled with a sinful nature. God had to withdraw from Adam and Eve because He is Holy and sin is automatically destroyed in God’s presence. That is the power of God’s holiness.

Where would we be today if Adam had told Eve that she had been deceived and that it was wrong to disobey God? What if he had stood up for the truth and refused to accept the sinful gift of the devil? Our world today would still be pure! But instead, our world is spiraling into destruction. Everything around us is becoming a threat to our lives.

There have always been storms, even when Jesus walked the earth, and we know this because in Matthew 8:24-26 Jesus calmed the storm. But there have never been so many tragic weather catastrophes ever in the history of the world as there have been in just the last few years, and especially in the last few months. There has never been the threat of global war that will leave millions dead in seconds as there is now. Immorality has never been so widespread and has never corrupted people so badly as we see now. Even Sodom and Gomorrah were judged and destroyed before they got to where we are today.

We are truly living in the times that Jesus talked about in Matthew 24.  All the signs are obvious, and the things that Jesus warned us about are happening right before our eyes. Time is running out, and as Christians, we can no longer stay silent. We must speak up for what is right and speak against the things that are wrong!

King Jesus is getting ready to return—and the devil knows it. This is why he is working so hard to bring about this corruption of sin. He is racing to sit on the throne as king! And he wants to create so much havoc in this world now so that when the time is right, he will be seen as the only one who can end all it all. And just as Jesus said in Hebrews 10:5 that a body was prepared for Him so He could come to earth and become our salvation, the devil also is preparing a body. And that body will be known as the antichrist. He will rise in fame and in power, and the people will love him because he will have all the answers to the world’s issues, and he will do great wonders and miracles to fool even God’s chosen people if it were possible. And he will sit on the throne that is God’s for a short time and gloat in his victory, and then he’ll pour our horrors upon the people that the world can’t imagine.

This is not something that might happen, that could happen, or at best will happen sometime in the future. We must stand up against the prevailing sin now and speak out against it. We must stand for the things of God regardless of what people say or think. Their lives depend on us speaking the truth and breaking this bond of deception so they can come to the cross.

This is not the time to be silent! We must speak up for the truth and shine God’s light in this dark world while there is still time.  We must be watchmen on the wall, warn the people and prepare the way (Isaiah 40:3-5) because Jesus, our King, is coming!

If this message has blessed you, please share it with others. And please subscribe to this blog if you’re not already a member so that you can receive all future messages directly into your inbox. Thank you and stay blessed! …ronnie