There is a very big difference between standing in faith and standing in foolishness. Yet, they can appear so similar that the latter can deceive many Christians and trick them into doing things that could jeopardize their lives.  So, how can we know if our stand is of faith or foolishness?

Faith is a conviction of the heart.

It’s that gut feeling that rises up inside of us and gives us confidence to know that what we’re doing is right. It feels good. It feels proper and we aren’t tempted to change our attitude.

It doesn’t matter what people tell us or what’s in a medical report or what the statistics declare for us. We know that we know that what we are doing is right. And how do we know that?

Our commitment is a result of our relationship with Lord and it’s based on what we know and what we believe. We know what God has to say about the issue we’re standing in faith on, we know the scriptures and we know who we are in Christ and what He has done for us. It’s deep inside our heart and has become part of who we are. We have become simple before Him and don’t question Him but rather we trust His Word.

This isn’t a ploy to get something we want, and it isn’t a chance that we are taking, hoping that it works. This is a trust in God, a belief that He can and will do what He’s promised He’ll do.

Foolishness is of the mind and is ruled by knowledge.

It takes the scriptures and concludes that this is a great idea, that since the Bible was written for Christians then this has to work. It’s all based on Biblical logic and assumption in what the mind has learned about God and about the redemption given by Christ. But it lacks the intimacy of knowing the Lord and trusting Him.  It’s based on the mind accepting that it should happen, and it lacks heartfelt commitment and conviction. It’s easily discouraged and changed because there is no foundation to it.

It’s also an attitude of tempting God, asking Him for things to better our own person rather than commiting ourselves to His will.

Many Christians fall into this and are turned away from God because they didn’t get what they declared or what they stood in “faith” for, and so their lives never saw the goodness of God in the land of the living. They stood on what they knew, on what they were told that God would do – a stand of foolishness, instead of standing on what they believed – a stand of faith.

The Lord DOES do everything that He says He will do. He is not a respecter of persons – in other words, He doesn’t like some of His children better than others and then bless them more. His Word is very simple – trust in Him with all your heart. Presumption and foolishness is not how Christians become victorious but rather, it’s how many lose their walk with God. This is foolishness and the Lord does not like foolishness. Trusting and believing God, accepting His Word into our heart and acting on it is standing in faith. And faith pleases God.

We need to examine our hearts so we can know whether we are standing in faith or foolishness.

“The simple believe every Word, but the prudent consider well his steps.”

6 thoughts on “Faith or Foolishness”

Ronnie Dauber is a Canadian Christian author whose passion is to write stories that will help people to know God. She has written 15 inspirational books, and these include The Crown Series, a collection of Bible heroes who God worked with to save the nation of Israel. Ronnie has also written One Glorious Night that will help you to realize what Christmas is all about. It’s packed with biblical truth, highlighted with God's power and filled with emotion. There's a sequel to this book called The Rising Son, which tells about the death and resurrection of Jesus. Both books are based on truth, but through her imagination, she has written them as testimonies by those who were there. Ms. Dauber has also written a fast-paced outdoor adventure series called Sarah Davies. These adventures are free of sexual content, profanity, and insolence, but they are packed with adventure and excitement. Please visit her site at http://ronniedauber.ca to see all of her books. 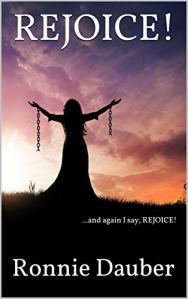 This book is filled with Scriptures to encourage you to praise God even more in the bad times because rejoicing in God brings us into His presence where we are surrounded by His peace.